I’ve seen WHAT LIES BENEATH a dozen times, at least. You know it — the ghost story/thriller that stars Michelle Pfeiffer and Harrison Ford and, I mean, do I really have to say SPOILER ALERT (I mean, am I really expected to keep secrets about a movie that you haven’t bothered to see for 14 years, keeping in mind that it’s on almost-free TV all the time? I don’t think so because it really just shows a lack of concern on your part and a lack of effort and that’s not my circus) before I remind you that:

…she gets possessed with Amber Valetta’s gorgeous spirit…

…then Harrison gets huffy and whiny about how hard it was to kill Amber Valetta and tries to kill Michelle with super paralyze-drugs in the bathtub?

It’s a great movie, mainly because Michelle weighs about eighty pounds and has that weird vein on the side of her otherwise perfect forehead and looks like she’s about to go over the metaphorical edge in a huge blaze of glory. And Harrison, who’s usually the hero in every single movie, is such an A-level tool here (plus, homicidal, psychopathic maniac whose name is NORMAN, haha) and she gets to outwit him. And that just makes WHAT LIES BENEATH….well, a big, old bunch of fun.

I found myself watching the movie again today and have gained more of an appreciation for it, if that’s even possible. First of all, how awesomely Y2K it is to have the mop-topped best friend drop some kombucha tea and witchcraft books by Michelle’s house while proclaiming such wacky things as, “Alimony. Ain’t it great? I lost a husband and gained a car!” thereby setting feminism (and maybe marriage) back, like, a thousand, billion years.

Okay, but here’s my point. After Michelle starts seeing things, she goes to see a therapist and tells him, (get ready) that she just sent her only daughter off to college and probably JUST HAD AN EMPTY NEST EPISODE. In which she SAW A GHOST.

Let’s let that settle in for a minute. 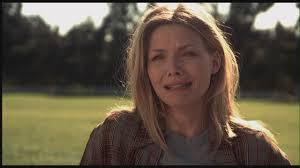 It seems like a million of my friends have been posting their pictures of dropping off their college-age kids at school and/or whatever sorority they pledged making those (slightly unsettling) gang-sign things with their hands to show their Greek spirit. It’s kind of hitting home because I have a senior in high school this year and we’re not really sure where he’s going, but it’s looking like it might be away and that may entail some picture taking in the dorm/first apartment at some point. (No fraternity gang-signing for this one. He’s not that kid.) So I’m thinking about all this a lot lately.

Anyway, I hope to sweet goodness that after I take the third and final child to college, I don’t have a mental breakdown and start seeing ghosts. Because I hope that I will realize that the house is just exceptionally empty and clean, not HAUNTED. I’ll be sad, but jeez… surely there’s a bright side. So much to live for. A lot less laundry. A lot less cooking. A lot less dirt. I can once again, with confidence and no fear, safely venture back upstairs and not have a stroke when I peek in the bedrooms.

When my kids go, I want to be happy and excited for them. I don’t want to cry. For some reason, I don’t like that weepy, mopey sentimental feeling. I want to believe — I want all of us to believe — that our children, the little critters we’ve raised with such care and tenderness, will be making their bright way in the world. as compassionate, responsible, contributing members of society. And hopefully not wasting our $10,000 – $40,000 by sleeping in and partying and then catching mono.

Look, when my kids go, I’ve got things to do. I do not have time for hallucinations and breakdowns and expensive therapy sessions. I would like to travel, to hang out with my husband, to write books and to build a tiny, modern house that takes me approximately thirty minutes, top to bottom, to clean. I do not have time for an empty nest episode.

Well, as it turns out, Michelle doesn’t either. She has to solve a mystery, using only a huge desktop computer, rudimentary internet and a surprisingly frumpy red dress. Okay. I’m going to wrap this up and watch her (shoot?) (stab?) (poison? — it’s been awhile and I can’t remember) Harrison.

And to my empty-nester friends, congratulations. Job well done.