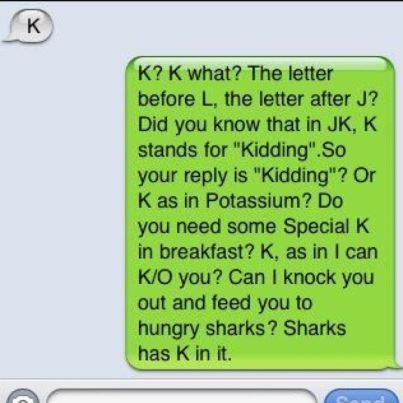 The other day a friend of mine asked me what I thought the meaning of life was… by text. While I could’ve answered her question–yes, you heard me, this is a subject that I think about with alarming regularity. That’s just how I do, Mr. Lil Wayne, sir– I felt the full import of my important musings on life might be lost in the micro-situation of the iPhone 4s screen (I mean, mayyybe the iPhone 5 screen could accommodate the scope of my profound thoughts, but that would be one daunting, green rectangle, and I didn’t know if she was ready for all that). I told her I’d email the meaning of life later, after I’d watched the season opener of Justified and had my bath.

I used to love texting. I still do, kind of, in some situations. Like when I’m sitting outside the house where my kid spent the night, and it’s 30 degrees, and I don’t want to go knock on the door. I just tell them I’m here and boom! they appear magically in the car 10, 15, sometimes 30 minutes later. I like it when I can tell someone I’m running late. I like it when I have to communicate some small bit of information, and I know neither me nor the other person has time for a long, drawn-out, Southern-girl phone conversation.

(By the way, I may have been born down here but I am fully capable of having the tersest, most bare-bones, New York City-style phone conversation. The less small-talk, the better. Try me sometime. I can promise I will under-talk you. And hang up before you know what’s hit you.)

Also, I’ve realized I’m way better at writing my feelings than speaking them. In writing I employ a ruthless editing. I’m succinct and use colorful metaphors and witty turns of phrases. It’s very planned out, though. Guarded. When I talk, I generally wind my way around the conversational path, blah-de-blah-de-blabbity-blah, like a meditation labyrinth…those little spirals New Age people put in their yards that lead you around in maddening, opposite-of-the-crow-flies circles so you can calm the frick down. And then, after holding forth for a bit, to drive my point home, I will repeat a few key points of the previous blabbity-blah-blah in case you didn’t get it the first time. Sometimes I will raise my voice while doing so. But this I know: when I write–or text–I’m a woman of fewer words, which some people seem to appreciate. Another thing: sometimes when I have to talk to a group of people I actually get nervous and can feel myself shaking and blushing. I’m not kidding. It’s called glossaphobia, the fear of public speaking. Look it up.

So you can see why I can, in fact, have a profound, deeply satisfying conversation via text.

But the truth is, I have fallen out of love with texting. Mainly because I had a friend break up with me via text. It was weird and confusing. I called her on the phone, but she didn’t pick up. She sent more zingers to my phone, and I went dark. You can work out the rest.

The experience made me realize something–if you want to hash things out with me, I’d prefer you just insult me to my face. Scream at me and call me names, if necessary, to get your point across. I’m not afraid of a little temper tantrum. But sending me little bubbles of venom through the atmosphere?

And then there’s the whole element of misinterpretation. Some people cannot text. They just can’t seem to use a combination of words/punctuation/emoticons to convey their feelings. Or they just don’t want to be bothered with all that energy it takes to type out a smiley face. Either way you enter into that weird, vague relational limbo illustrated by the following real-life conversation…

Texter #1: HEY, YOU WANT TO MEET FOR LUNCH LATER?

Hm. Is that fine, like “fine, whatever, I really just made a gagging face when I got your text” or is that fine, like “that’s perfect, I was just thinking how you are my favorite person in the whole world and I would like nothing more than to have lunch with you”? The possibilities, especially for an obsessive thinker like myself, are endless. Not good.

One of my sons has a little middle-school romance going on. I shouldn’t say little. These things can be potent experiences, first loves even, leaving fossil-like imprints on tender hearts and shaping behaviors and self-esteem for years to come. When I noticed he was texting her round the clock, I thought it was time to talk. I asked him about her. He told me she was funny (a boy of excellent priorities, that one). He showed me a picture of her. She was…gulp…gorgeous. I mean gor-ge-ous. He said he was her first real boyfriend.

I know they can texttexttexttexttext all afternoon and into the night (we confiscate phones during homework and bedtime), but I realized, if I just ignored this, let it run its natural course, this girl would experience texting with a boy as an actual relationship, and they would miss doing the things REAL adolescent relationships are made of…like listening to each other breath on the phone for hours (remember that? that was so romantic, no?). Without even getting into the myriad of horrible text-y things that can end up flying back and forth from phone to phone, I didn’t want my kid to be responsible for half-assing this thing and forever being remembered as the pathetic first boyfriend who set the precedent for phoning in a relationship. (Ha. You’re welcome.) No way. My kid was going to be a great boyfriend. He would pick up the phone and call this beautiful, innocent creature. They would talk for a while, and then he would hang up, and they would go their separate ways to do homework, chores and Bible study. Just kidding. Sort of.

He thought that sounded cool and said he would talk to her about it. She thought it was cool too. They still text. But not as much.

Can we all just agree texting is perpetuating the half-assification of America? That it’s a crutch for cowards who can’t deal with a face to face confrontation? A day-ruiner for overly-sensitive worrywarts? A substitute for real interaction?

I have an idea. When you make a new friend, or start dating someone, the two of you must sit down FACE TO FACE and lay all your texting preference cards out on the table. Do you text round the clock like a teenager or are you an only-in-emergency old-schooler? Do you get your feelings hurt if your texts aren’t returned immediately or do you view them like leaving voice mails: the recipient will get back to you when they get back to you? I maintain that two people need to be text compatible before venturing further.

I love to write. I have a lot of words inside of me. It’s easy for me to text you the meaning of life, but maybe it’s too easy. So I’m probably just gonna do it to let you know I’m running late.

The Grand Supreme
Sherlock, Everybody.