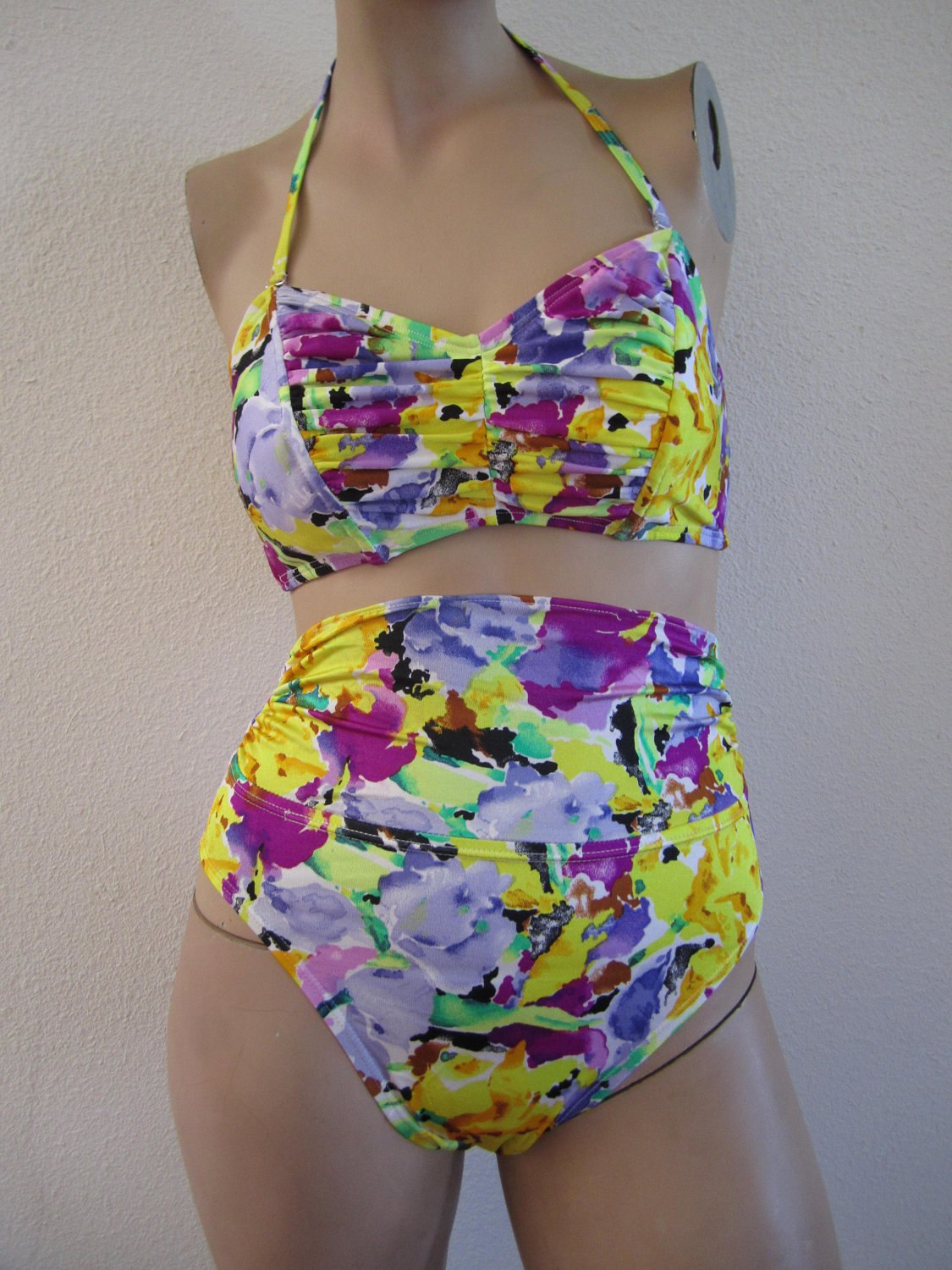 Today I was strolling through a department store, and I happened across a swimsuit similar to the one pictured above. A headless mannequin was wearing this one, which was probably a good thing, because if she’d had her head, the look on her face of mortification and colossal shame would’ve been unbearable to witness. I pictured her with her head, looking at me with pleading mannequin eyes, mind-messaging me to please wrap a sarong around her, for the love of God.

The swimsuit confounded me. Was it a two-piece or a one? I couldn’t figure it out. It was like the nightmarish inverse of a tankini, that strange bisected thing that gives us moms the security of a one-piece suit while technically WEARING TWO. (Take that, pregnancy and your subsequent forty pounds, you will not defeat me.) Along with this lie the tankini told us, that we had not succumbed to the mom-suit, it allowed for an incredible range of motion with which to wrestle our kids into water wings and/or to reach over and pick up our People magazines. But, let’s be honest, it was nothing but a one-piece frontin’ as a two.

This puzzlement, this high-waisted monstrosity I was beholding in Von Maur, was exactly the same thing.

I mean, c’mon, if you’re gonna cover up that much, why not just go full-on maillot? And while you’re at it, slap one of those dang cheerleader skirts over it. The only thing I can think is that this suit was made for the gal with such a spectacularly toned upper abdomen, a solar plexus so perfect and luscious, she just can’t bear to cover up that magnificent three-inch strip of skin.

Bathing suit shopping doesn’t have to be horrible. It can be a moment of victory. So in the spirit of that bit of fonfidence (fake confidence) let me offer you the Top Five Things To Keep In Mind As You Shop For Swimsuits:

1. Satan Installs All the Lighting in Dressing Rooms. His name is Lucifer, as you know, from the Latin meaning “One Who Installs Lighting” or something like that. Coincidence? I think not. There’s no point in complaining about it, girls, it is what it is. So unless you want to tangle with the devil, keep your suggestions of incandescent bulbs and dimmer switches to yourself. Just take a deep breath, open your eyes wide and prepare to get an eyeful of your wintry pale, chicken-skin self in all its retina-burning glory.

2. Yes, They’re Fat Mirrors. Just Like at the Carnival. They are. It’s science. I know I’m not a scientist, but I trust my intuition on this. Don’t ask me how or why they would want to special order funhouse mirrors for their dressing rooms. Or wonder how many more millions more the store could sell in swimwear if they indeed went the opposite route and used THIN MIRRORS. Nobody asked you, Miss Marketing Genius. Keep it to yourself.

3. No, They Will Not be Piping in Xanax in Gas Form While You Try On Suits. You will have to bring your own. Plan accordingly.

4. Buy the Freaking Bikini Already. If that’s what you want. Even if you’re a mom. Of twelve. Who needs to lose a few. Do not think you have some moral obligation to shield the world from your less-than-perfect body, because you don’t look like some movie star or Kate Upton. Your body is yours, and it’s great. Those people are who they are and do what they do because they won the genetic jackpot. They don’t count. Comparing yourself to them is THE WORST THING EVER. In fact, if you find you’re compelled to look at pictures of celebrities in bathing suits on the internet, stay away from the women. Keep it to Hugh Jackman and what’s-his-face, the kid from High School Musical. Just promise me, you won’t hide behind something like in the picture above. (Unless you have some major modesty convictions, which is fine and I understand, but I have this sneaking suspicion that most of our so-called modesty is just an excuse for covering up what we’re feeling ashamed of. And unless, of course, you like the swimsuit in the picture, in which case, I’ve probably offended you beyond repair by now.)

5. And While You’re At It, Tell Your Body You Love It. I’m serious. It works hard for you, even when you don’t let it go to sleep or give it way too much to do or pour Diet Cokes and Mocha Frappacinos and Cocoa Pebbles into it. (I am speaking to myself here). It fights to stay healthy, your body, no matter what. To keep all those cancer cells at bay and to quietly tell you what it needs. Give it some love. Don’t bash it. Please. (By way of example, my five-year-old son once endearingly called my stretch marks “white lightning” which made them seem kind of superhero-ish. Clever boy.)

I think the female body is a beautiful thing–a really, really unbelievable work of art–and not just bodies we see in magazines and movies. Real ones. And I consider myself kind of artsy-ish and open to, you know, a bit of tasteful nudity in art and whatever. I’m the kind of woman that says things like You go, girl! when the breast cancer survivor has photos taken of her mastectomy.

But a couple of months ago, a friend of mine told me about a coffee table book she and a photographer friend were working on. It was a project to raise money for cancer research (At least I think it was. I’m not exactly sure because at that point, something in my brain like an alarm went off, and I’m pretty sure I missed most of those details). It was going to be a series of artfully shot photographs of women’s breasts. The photos would be anonymous, all taken from the neck down so no one could be identified. They were going to use all ages of women–young, old, mothers, grandmothers, cancer survivors and healthy women.

I think I nearly flipped the table with the sheer force of my NO, and she very graciously smiled and said she understood.

I don’t love my body quite that much.

Sherlock, Everybody.
Hey Winter, Summer’s Way Hotter Than You