There are two things we all know you don’t talk about if you don’t want to start a fight—politics and religion. I have succeeded in finding a third.

Yesterday I mentioned on Facebook that I felt the need to blog about capris (and how I thought their time had probably passed). I got lots of responses from friends who buy them, wear them, and love them with a fierce protectiveness and loyalty, similar to the way Daenerys Targaryen feels about her dragons and blue criss-cross dress.

Nobody seriously called me out—mainly because I have nice friends who are the kind of people who are pretty forgiving and don’t make too big a deal about me saying stupid things. I felt terrible, though, I really did. I’d criticized something my friends loved, and I regretted making people feel bad. And, as one kind friend in my exercise class gently remarked, “Try gaining fifty pounds and then see how you feel about capris.”

Also, she pointed out that I was wearing capri yoga pants. Which I was. Bam.

I was glad, though, that she spoke up–and also the other women on the Facebook thread–because this is no easy subject, clothes.

So for me, this all started with a funny article in Jezebel called “Death to the Maxi Dress: A Manifesto” by Sarah Miller. I really identified with the article. I have had a love/hate relationship with maxis like the author talks about in the piece. In the store, maxis draw me like magnets. They look so carefree! So cute and bohemian and comfortable! But, in the end, they bring nothing but heartache. They just never work. It’s a height thing for me, I think. And they’re really hard to walk in. The whole carefree thing is false advertising—they’re really incredibly restrictive.

I think it’s pretty okay to hate maxis. I think you’re mostly safe, also, throwing shade at Uggs, stilettos, tube tops, and sequins. Oh, and hats. (Once, when I was at the beach with a friend, I was about to buy a cute, straw fedora and she said, “If you buy that I will not sit next to you at the pool.” She was kidding. Sort of. I think. But she did admit to harboring a serious hatred of fedoras. I, on the other hand, think they are adorable. Fedorable, in fact. We agree to disagree, as you do with besties.)

But capris are different. They are a summertime wardrobe staple. And therefore, a minefield.

Here’s the thing. I have a conspiracy theory about capris. I have this suspicion that they were created by the Male Fashion Patriarchy (that’s a thing, I’m told) in order to throw grown women a bone in the summer time. Like, you know, Hey, gals. Um, yeah, we understand it’s hot out, and long pants make you feel like you’re about to catch on fire, but we can’t allow you to wear shorts unless you’re under thirty. So I’m gonna need you to wear these pants that are a scant three inches shorter than regular pants. They’re not really cooler but they’re called capris, so that should make you feel like you’re on an island near Italy. And they’re better than a burkha, am I right? Har har har.

The idea of that makes me want to call all the sisters together so we can burn our capris in a trashcan.

Remember bra burning? I was not of bra wearing age at that point in history, but, as I understand it, the idea was a bunch of women decided males had invented the bra in order to restrict their freedom and keep them bound and oppressed. So in order to give the finger to THE MAN, they burned their bras.

I’m fairly certain a lot women back then balked at the practice. I mean, let’s face it, male fashion patriarchy aside, bras are incredibly useful. Really MOST effective at corralling the whole situation. The bra burning holdouts were probably all like, No offense, sisters, I stand for equal rights and all but I gotta have my Maidenforms. See ya!

This is the way a good 50% (*not a scientific survey) of my friends feel about their capris. As my friend explained, she doesn’t feel comfortable wearing shorts and capris really are a great compromise in the summer. It’s like there’s a Venn diagram of what is flattering and what is comfortable, and capris are the intersection of that.

In an ideal world we’d all stay in that glorious intersection. In theory, I don’t think we should dress for others. Not for our parents, or the religious leaders or the men in our lives (or the random man walking down the street). Certainly not for the inconsequential opinion of some blogger. The beautiful thing is, unlike a large portion of earth’s female population, we have the freedom to wear what we want.

There are just so many psychological layers to the whole thing.

For me, I just want to empower women who ACTUALLY WANT to wear shorts, to wear them. If they don’t wear them because of some cultural restriction or a shaming voice in their head telling them their legs don’t look good enough to expose them to the world, I want to say they shouldn’t have to suffer through the broiling summer just to make other people happy. To those people, I say BURN THE CAPRIS. BUY SHORTS. STICK IT TO THE MAN.

To the rest of you who feel fantastic and comfortable and beautiful in your capris, I say BURN THIS BLOG. WEAR CAPRIS. STICK IT TO THE MAN.

In conclusion, I found these delicious tidbits while doing intricate scientific research for this blog:

Cam Newton, below, advises you to wear velvet slippers with them: 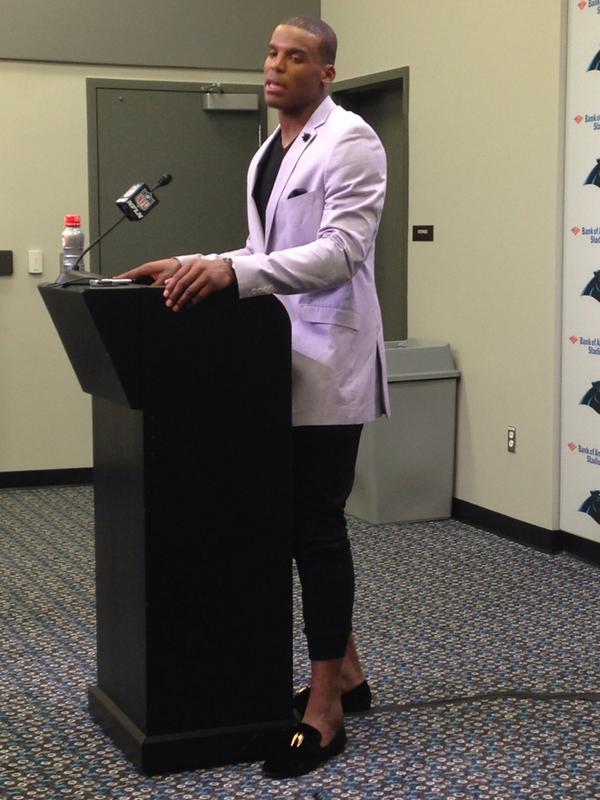 Unsolicited Advice for Literary Characters
It’s My First Rodeo, Not My First Book